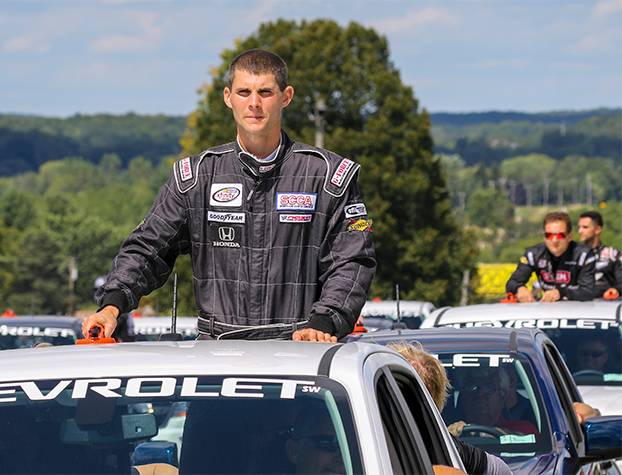 Nicolas Hammann is an up and coming road racer from Elkhart Lake, WI. He started karting at age 6, moved into cars at age 16. He became a factory racing driver for Nissan at the young age of 20 after winning Nissan’s GT Academy in 2014. After winning he participated in Nissan’s driver development program in the U.K. for 3 months racing all around the U.K. with instructors coaching him as he obtained his FIA International racing license.

He raced all around the US and world for Nissan in 2015 and 2016 with best finishes of 2nd at the 24hrs of Dubai in a Nissan GTR GT3 as well as finishes of 4th at Road America and Circuit of the Americas with the Doran Nissan 370z in IMSA Continental Tire GS competition. He participated in Nissan’s Micra Cup in 2016 where he finished on the podium at multiple events.

Nic made his NASCAR Xfinity road racing debut in 2016 and since has made three additional starts with a best finish of 15th in a Chevrolet Camaro at Road America in 2019 recording the team’s best finish to date.

Nic graduated in 2018 from UNC Charlotte with a bachelor’s degree in mechanical engineering and has worked as a chassis development engineer at Honda R&D and is currently at the GM Technical Center in Charlotte, NC as a simulation support engineer for Hendricks Motorsports.

Nic continues club racing in NASA and SCCA in a Honda S2000 and also made his Trans-Am 2 debut in 2021 in a Ford Mustang where he finished 7th out of 35 plus entries at his home track of Road America. He participated in the prestigious One Lap of America in 2022 finishing  16th out of 80+ entries in a stock Acura TLX Type S and 2nd in class.

Outside of racing Nic enjoys staying fit (running, biking, and weightlifting), working on cars with his dad, racing on simulators, and spending time with family and friends. He is engaged to Rachel and they have a cat named Gracie.